HomeMeet Our HeroesStaff Sergeant Aaron Hale
A- A A+ 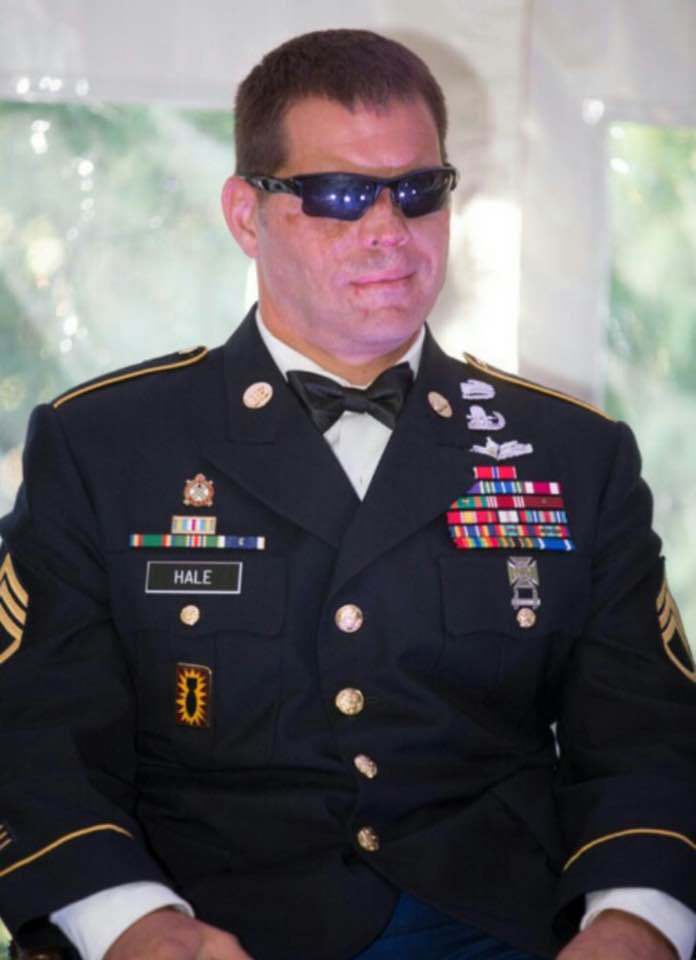 Army Staff Sergeant Aaron Hale was severely injured in Afghanistan when an improvised explosive device (IED) detonated in his presence. Hale, of the 760th EOD (explosive ordinance disposal), served a tour in Iraq and two tours in Afghanistan. EOD technicians are the Army’s tactical and technical explosives experts, who are trained to destroy and disable unexploded ordnance, improvised explosive devices and weapons of mass destruction. SSG Hale’s unit completed 1,100 counter-IED missions, destroying more than 20,000 pounds of enemy explosives. SSG Hale estimates he disabled as many as 50 explosive devices during his last tour in Afghani-stan.

On December 8, 2011, SSG Hale approached an IED, which he had worked on from a distance using a robotic device. He was about 30 feet away when it exploded, sending shrapnel everywhere. Every bone in Hale’s face was broken, and he had severe burns to his face and upper thighs. His right eye was ripped completely out in the blast, his right eye lids were fused together from the severity of the burns, his left eye exploded leaving half in the socket, and his left eye lids were torn. Exploratory eye surgery to remove shrapnel and assess the extent of his injuries concluded that he is completely blind. SSG Hale’s skull was cracked and leaking spinal fluid, his carotid artery was nearly severed with shrapnel piercing it, both eardrums were completely blown out, his sinuses were crushed, and his nostrils were torn.

Despite suffering severe injuries and being left sightless, SSG Hale, who landed on his hands and knees after being sent airborne, felt to see if all his limbs were intact, and then got up and tried to find his way back to his unit. A medevac unit arrived 10 minutes later, and SSG Hale passed out.

Hale was quickly transported to Bagram Air Force Base for treatment, then on to Landstuhl Regional Medical Center in Germany, before finally arriving at Walter Reed National Military Medical Center. After a month of treatment at Walter Reed, he was transported to the James A. Haley Veterans Hospital in Tampa, Florida, and then to the Charlie Norwood VA Medical Center in Augusta, Georgia which specializes in blind rehabilitation. SSG Hale’s recovery has been remarkable. The spinal leak from his brain is closed, he has regained his hearing, his face is healing nicely, and he has graduated from the blind rehabilitation center.