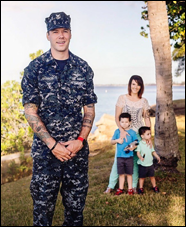 US Navy Petty Officer First Class Ryan Shannon joined the military because he wanted to serve something bigger than himself. He also wanted to give something back to his country while providing a strong foundation for his family.

Petty Officer First Class Shannon suffered a number of injuries throughout his service. His first traumatic experience came when he served as a first responder to a ship fire. The experience left him with severe PTSD.

Over a year later, while responding to a fire drill on a ship, an accident occurred when his bunk mate jumped out of bed and landed on Officer Shannon’s neck, cracking two vertebrae.

He continued his military career, but suffered another injury when a broken bone in his foot went undiagnosed for three weeks. He was left with partial paralysis and can no longer use the foot. He underwent surgery to implant a device in his spine to help alleviate the pain.

Petty Officer Shannon, his wife Jasmine and their two sons received a home in Illinois.