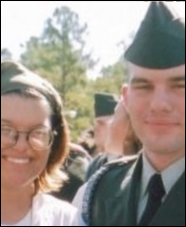 Army Specialist Shawnne Springman joined the military in 2001 out of Lapeer, Michigan because he wanted to serve his country while also continuing the legacy of his father, who served 20 years in the Air Force. He served for six years before being discharged and served another four years in the National Guard.

Specialist Springman suffered many physical and psychological injuries during his service. He has been diagnosed with severe PTSD and TBI and also suffers from lower back, knee and wrist injuries.

The years of war in Afghanistan and Iraq have brought PTSD among military personnel to the attention of the American people as never before. Most PTSD sufferers repeatedly relive the trauma in their thoughts during the day and in nightmares when they sleep. While the condition varies from person to person, more and more studies have linked PTSD with chronic depression and suicidal ideation.

Specialist Springmann, his wife, and their three children, received a home in Kentucky.