HomeMeet Our HeroesArmy Sergeant First Class John Goudie
A- A A+ 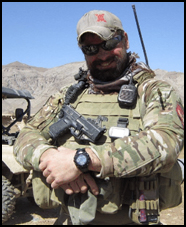 Army Sergeant First Class John Goudie joined the military because he wanted to follow in his family’s footsteps of military service. After joining the Army in 2009 he rose to join the elite 7th Special Forces Group. He served his country for nearly a decade.

It was in 2012 while serving a combat mission in Afghanistan when SFC Goudie was shot several times, including in the leg, his right shoulder, arm and back. He was shot at point blank range by an Afghan Special Forces Soldier who turned on the Americans inside their own compound. Four other team members were injured, and another was tragically killed.

His injuries resulted in the amputation of his left leg, a humerus replacement, internal wounds, loss of muscle tissue, a traumatic brain injury (TBI) and PTSD.

Sergeant First Class Goudie, his wife Kristi, and their three children look forward to living in their new home in Windswept Estates in Freeport, Florida thanks to our generous donors and our Partner Holiday Builders!